Reflecting On Reflections--the stories inside the shine


I love things that shine, sparkle, or shimmer, just because they are beautiful. I also love anything that holds secrets or points beyond itself. Some things, in reflecting light, do both.

Recently I was fascinated by the way people incorporate drawings of cabochon-cut gems into Zentangle-inspired art. Cabochons are rounded and polished, not faceted, like smooth blobs of glass. In looking at demos of how to draw them, I was puzzled by the white highlight. Should the white spot be round, or a long bar? Where should it be placed? I looked at photos of cabochon-cut gems, using Google images (so useful for things like this!), trying to figure out how the bright spot works. In the photos, I saw reflections in the gems of... their light source.

But it wasn’t just the light source that I saw reflected in the gems. Was that the camera apparatus making the dark square shape? And the shop where this other photo was taken must have a whole bank of windows. In one gem, I even saw the silhouette of person sitting nearby.

In each case, all I was looking at was a photo of a single gem, but the reflections told me more.

This shouldn’t have been news--we have mirrors in our cars precisely to give us information about things out of our line of sight. Reflections sometimes play a role in stories, too. I remember an Ellery Queen mystery (the TV series) where the lack of a reflection, where one was expected, revealed something important. And in Bladerunner, a reflection in a photo gives the detective a clue (at least, I think it was a reflection—it wasn’t entirely clear in the movie). A painting that includes something shiny, such as a silver teapot, might make a good clue in a mystery novel-- the distorted reflection of a face could reveal that a third person had been present at the sitting and perhaps even who it was (by their distinctive hat, say).

Reflections also show up in mysteries because of the misleading way they reverse the appearance of what they show. Someone who sees something in a mirror sees it reversed—information, and yet misinformation.

For the most part, shiny things are appealing because of the way that they play with the light, not because of what their reflections tell us. In fact, paying too much attention to the reflections in gems rather takes away from their immediate appeal. But I like knowing that if I want, I can see more than just the gem. I can see the world around it. 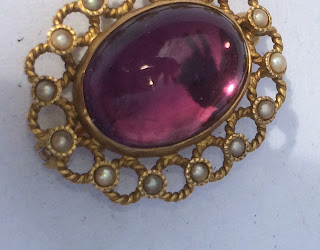 Posted by Samantha Corte at 1:14 PM

Email ThisBlogThis!Share to TwitterShare to FacebookShare to Pinterest
Labels: Art and Crafts, Stories and Writing