Sun and suncatchers--rainbows in my room


In winter, the sun shines into my study.

In my dreams, it shines on a room that is serenely uncluttered, where ferns and houseplants flourish, and where crystal prisms in each window cast drops of rainbow on the walls and floor.

In fact, my study is so cluttered that I’m having trouble finding papers when I need them, and my houseplants are surviving tenuously on intermittent waterings. But I do have suncatchers in almost every window, and when the sun’s angle is right, my study is filled with tiny rainbows.

A glass ornament hung on a ribbon or plastic line isn’t going to stay perfectly still, and so the rainbows drift, lazily, around the room. If I nudge the prism, the rainbows jitter madly about for a moment, then race across the room, gradually slowing to near-stillness.

There’s a reason rainbows are associated with unicorns and fairies and other magical creatures. They are nearly magical themselves—sunlight split into colors. Sometimes, when I glance at a suncatcher from just the right angle, it lights up in a momentary blaze of color—green, maybe, or violet. I imagine that someone watching would see a tiny rainbow drifting over my face at that time, entrancing me. 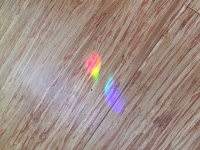 The whole idea of rainbows brings out my whimsical side. Years ago, I lived in an apartment where I hung a suncatcher in the kitchen window. Mornings, I held my cereal bowl out so I could pretend I was flavoring my breakfast with rainbow. I still like the idea of rainbow-flavored cereal.

On the practical side of things, there are some difficulties in hanging chunky glass crystals (the best kind for rainbows) in a window. As I mentioned, they can swing if accidentally bumped into, and while I don’t know who would win in a contest between crystal glass and window glass, I’m sure it wouldn’t be good for either. A suncatcher on a shorter cord would be less likely to swing into the window, but it would also catch the sun less often. So most of my suncatchers hang in windows that have interior screens. The crystals would look better in windows without screens, but the screens provide extra safety for the windows.

The sun only comes through the crystals at certain times of day and only when it traces a more southerly path through the sky. But when I think about it, maybe that’s a good thing. If I had rainbows every day, all day, they wouldn’t seem as special.

Till next post.
Posted by Samantha Corte at 10:59 AM