Woodsmoke, Kayaks, and My Dad


Last weekend, my daughter camped out with other members of her mountain bike team on the night before the race. We dropped her off at the campsite before heading for our own, cozy hotel room.

The family camping area was packed to capacity. Kids ran around yelling; someone had a campfire going. The trees, the smell of woodsmoke, and the noise brought me back to the times my dad took us all camping, and my brother and I were the ones running around playing loud games. I vaguely recall helping out with the tent—something about poles that fit inside each other, perhaps matched by color? Sleeping bags, of course, and maybe air mattresses that had to be blown up? And Cutter’s, of course, to keep off the mosquitoes.

You can tell I didn’t really take to camping, since I haven’t camped for years. Still, standing there smelling the woodsmoke, I thought about my dad and was glad that he had taken us.

I thought about my dad a month or so earlier as well, when my daughter was going kayaking with members of Boat Club.  They needed another adult on the water. So I rented a plastic kayak along with the others and got in awkwardly. Once on the water, though, I really enjoyed it. I watched the kids messing around and wished that my dad could be there to see his granddaughter on the water—and to paddle his own kayak again.

I remember helping him put together the kayak when I was a kid. It came in several heavy canvas bags. Wooden pieces had to be slotted together, poles had to be inserted along the sides, and then the two ends had to be pushed into the rubberized hull before they could be locked together and the seat backs put in place.

Then we would go out on the quiet lake and paddle around the edges.

There are other things I learned from my dad. He liked to make things, sometimes from kits. I remember a down parka, a paper clock with a pendulum, and of course the electric organ, which took forever with all those wires to solder. I learned some basic skills from him as he carried out his projects—how to use the sewing machine, and how to cut and score paper. (I didn’t get into electronics, though he let me try soldering some wires.)

He also had a great interest in the latest technology and insisted on getting a computer back when it seemed like a crazy idea. I mean, who had a computer in their home?

But he got a Sinclair and it had so little memory that you could easily type in a Basic program and run out of room before you were done. And what do you know—he was right about computers being interesting. Now everyone has one.

He liked to garden as well, but since he also liked to travel and we moved every two years, his gardening was limited. I, on the other hand, was determined to live in one place when I grew up and have a really nice garden. But we shared a love of home-grown tomatoes. I always try to have tomato plants, even in years when the rest of the garden is in sad shape.

There were things my dad didn’t like, certainly. He was scornful of “ya-ya music”, which is what he called rock, and probably most music that followed it. (Did he get the term from the Beatles’ song “I love you, yeah, yeah, yeah, I love you, yeah, yeah, yeah”?) He abhorred the practice of having a TV in the living room (never in our house) or watching TV during meals. Really, he disliked most TV shows except documentaries.

And he could have the most irritating little smirk when he felt he was winning an argument.

Overall though, he had a lot of enthusiasm and a lot of interests. I wish that he could be here to share them with his granddaughter.
Posted by Samantha Corte at 10:52 AM No comments:

Email ThisBlogThis!Share to TwitterShare to FacebookShare to Pinterest
Labels: Art and Crafts, Household and Family, Nature and Gardens

Between the shooting at the concert in Las Vegas and the Parkland school shooting, people have had compelling reasons to talk about gun violence and how we should respond to it. We all have an interest in our own safety and the safety of our kids. And yet, people still come to drastically different conclusions about how to approach this.

One group of people finds it intuitively obvious that making it harder for people to get their hands on guns, especially guns that can be fired many times without reloading, will reduce deaths in school shootings. If the shooter has to keep stopping to reload, he won’t be able to shoot as many people before someone stops him.

Another group finds it intuitively obvious that having more armed adults at schools will reduce deaths in school shootings because it takes someone with a gun to stop someone with a gun. Having armed personnel on hand will mean shooters are stopped faster, before they can kill a lot of people. Therefore, they think, we should make it easier for teachers and staff to bring guns to school.

The first group, on the other hand, thinks that it is intuitively obvious that having a lot of guns and a lot of kids in the same building is a recipe for disaster.

The problem with intuition is that what seems blindingly obvious sometimes isn’t. This is well known to people involved in medicine and is the reason that new treatments have to prove themselves in trials, no matter how plausible they seem. So in making decisions about gun policies, one thing we desperately need is good research on guns and safety. The RAND Corporation recently published a review of available studies on the effects of gun policies, and one of their conclusions is that there are big gaps in the research available. They also noted that changes in the way information is collected could be tremendously useful.

I would hope good research would also try to control for different circumstances. For instance, when it comes to guns and self-defense, does it matter where you live? Whether law enforcement is five minutes away or an hour? Whether there are large predators in your area? What about your domestic situation?

I’m not saying that better research will end the arguments over gun policies. There will be conflicts of interpretation. There will probably also be some trade-offs to be argued about--personal freedom versus public safety. However, better research would give people something more concrete to argue about and something to test their intuitions against. That's worth funding.

I have one more thing to add. When I showed the draft of this post to my husband, I said that I thought the most important part of it was the link to the RAND report. He said he doubted it made any difference--that most people have already made up their minds and won't consider research except insofar as it supports what they already believe. Please, people, prove him wrong. When you read about research results, consider them with an open (but critical!!) mind. Consider the source, the reasoning, and who, if anyone, has reviewed it. Don't judge it by whether it matches your "intuition".

Posted by Samantha Corte at 9:57 PM No comments:

Email ThisBlogThis!Share to TwitterShare to FacebookShare to Pinterest
Labels: Discussion and Philosophy

Catalogs--a glimpse into other worlds

We get way too many catalogs at our house. A lot of them are repeat copies from familiar companies, but others come from companies we’ve never heard of before. Once in a while, a catalog arrives that gives an interesting glimpse into another world.

Just recently, I received a catalog from NRS. That’s “National Roper’s Supply”, suppliers to those who engage in cattle roping. It’s a very thick catalog, with everything from clothing to saddles to horse trailers. And, of course, ropes. I have no idea how I ended up on their list.

I leafed through it, marveling at the incredible variety of boots for sale. Nothing surprising about boots for sale in a catalog aimed at people who spend a lot of time riding, but I had no idea that there was such a fashion for brightly colored accents on western boots, or textured finishes on the leather.

Beautiful leather belts, folding knives of many kinds, shirts, hats, and a smattering of household goods followed. Catalogs always include some t-shirts with topical pictures or sayings on them, and this was no exception. I was particularly captivated by a women’s tee that said, “Surviving on coffee and dry shampoo.” Is this a popular catchphrase? I find myself wondering if it simply means “I’m way too busy right now for regular meals, sleep, and dealing with my hair,” or whether it makes reference to people camping out at roping events with their horses and equipment. Perhaps cooked meals and showers have to wait till they get home again? 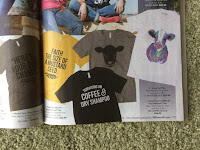 The largest part of the catalog was concerned with tack and other gear needed for a competition that involves horses. I only glanced through, since I don’t ride, but what struck me is that any item people need will be made available in a variety of colors or styles. Pads and blankets don’t just vary in materials and other functional ways, but in stripes and patterns as well. Breast collars are available with stitched or stamped designs. The selection of spurs made me think of jewelry. 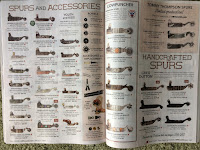 On the one hand, then, looking through the catalog reminded me of the many different communities that exist in this country, not just grouped geographically but also by interests and activities. I know almost nothing about competitive cattle roping or the way of life that includes it. I don’t know its fashions or its “in” jokes. I know nothing about most of the essential equipment.

At the same time, the catalog reminds me of some commonalities among people. We all like to personalize our things, to display our own sense of style. Whether that’s more likely to involve patterned Converse high-tops or western boots with neon-blue tops depends on the groups you belong to.

We like to show our sense of humor, too, with t-shirts or tea-towels or bumper stickers. Sometimes what one group finds funny doesn’t translate well to another group*, but we all like to share jokes with others who have the same interests and who will notice our shirt and “get it.”

And given that we like to display our sense of style and humor, the businesses of America will ensure that we have ample choices, not just in clothing but in pretty much every little item that we need, and will send us a big, full-color catalog to make sure we’re aware of what’s available, whether our interests are cattle-roping, knitting, or baking muffins.

We all get catalogs.

*To take an example from some other catalogs-- I’ve never understood why anyone would want to label themselves an “Old Fart.” That joke wouldn’t go over well in my family, but judging by its persistance in catalogs, clearly it’s funny to a whole lot of other people. On the other hand, the button “I’d like to save the world but no one will give me the source code” went over very well here.
Posted by Samantha Corte at 8:35 AM No comments: