Quite a few years ago, I bought a wicker hamper to put my laundry in. I like the way it looks and it fits nicely at the foot of the bed. Unfortunately, my cats find wicker to be a really excellent surface for exercising their claws. By now, that hamper has really taken a beating. I'd rather not have to replace it. So I thought I'd try covering up the sides with fabric.

I wasn't sure what fabric would look nice in my bedroom (green walls, red-brown wooden bed, white trim... a lot of clutter....), so I didn't want to spend a lot of time or money on something nice, only to discover I didn't like the effect. I had old sheets and I found an interesting piece of green upholstery fabric with a scroll-type design at the Scrap Exchange. It wasn't big enough to go all the way around, but the back of the hamper faces the footboard anyway and doesn't normally get scratched.

The green upholstery fabric was very stiff and thick. Since I planned for the cover to fit under the lid (a tight squeeze, given that the inner lining also has to fit through there), I used the thin white sheet cotton for the upper part.

Even so, the piece turned out to extend too far around. It bunched up by the hinge. I needed to make a cut-out. Being lazy, I just folded and stitched those corners so it tapered up to the top.

To hold the cover on, I attached elastic to one side and used buttons on the other. I hope that it will be enough. If our black cat claws it too vigorously, she might manage to pull the cover down. In that case, I will have to add further features. For now, it folds over the hamper at the rim, goes partway under the lid, and is pulled tight at the sides using elastic.

You may notice the elastic isn't very straight. I had a lot of trouble with the buttonhole, which I didn't understand since I have made buttonholes on that machine before without trouble. I thought maybe the thickness of the nearby seam was somehow involved, and moved the buttonhole further away from the edges. What I should have done was to look up the error code in the manual. "E5" means that someone pressed the start button while the foot was plugged in. Duh! I didn't realize that caused an error, because I rarely use the start button. I could have saved myself a lot of aggravation.

The hamper cover is now finished, at least until the cat tears it down. I'm not really into draping furniture with fabric, but I think it looks rather nice. I'd prefer the wicker, but as a second best option, I'm pleased.

Posted by Samantha Corte at 8:26 PM No comments:

Pelican Shadows and Other Shadows of Interest

This week I stood on the boardwalk facing away from the beach, watching pelicans soar by in jagged lines. Their shadows swooped over the slants and peaks of the rooftops as they passed, a second procession of pelicans in silhouette.


Light has so many interesting effects—shine, sparkle, reflection and refraction—and the absence of light, in the form of shadows, can be interesting as well. I once lived in a house with a window high up along the stairs. There was a tree just outside it and the sun shone through the leaves, casting shadows of foliage on the wall. The rectangle of sunshine was dappled with mysterious silhouettes that were constantly shifting as the breeze stirred the leaves. It was a bit like wallpaper in motion.

At the beach, the way the sun shone through the waves as they ran up the shore brought back to me the strange lines of light and shadow at the bottom of a swimming pool on a sunny day. The water above is clear and there is nothing floating there, but as the air brushes past the water, the lines of light and spaces of shadow move gently. If you splash or make too many waves, the lines shake and are agitated almost out of existence, only to reappear as the water calms.

All these things, and their shadows, are small enough to be distinct from their background. Clouds, on the other hand, have such big shadows that usually we only notice them as the difference between a spell of overcast sky and a burst of renewed sunshine. From above—say, in an airplane—we could see the clouds and their shadows below them, but from the ground, we just know that the sun has “gone in.”

I read somewhere that in planning landscapes, one should take into account the view from one’s window. “What can you see from the window? How can you make it more attractive and interesting?” I liked that idea, and I’m wondering if someone has taken this thinking a step further and asked, “What shadows will be created on this wall at different times by these plants and this landscaping?”

Perhaps someone could take it even further and design something where a particular shadow appears only when the sun is in a specific position, rather like an ancient astrological calendar.  That would be like having a secret message written on your walls, except that the invisible ink is only revealed when the sun is properly aligned. Hmm. I wonder how I could work that.

Posted by Samantha Corte at 9:42 PM No comments: 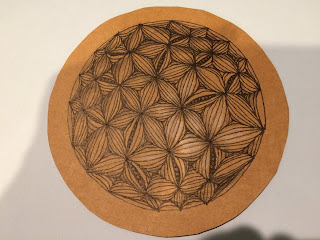 The Diva's challenge #365 was to do a monotangle using Puf. I don't think I had used Puf before--once I understood the step-out, I liked it.

Here I used a big triangle, subdivided into smaller triangles, for the center. The three edges then have a sort of warped grid of rectangles. I added some black colored pencil shadows, and some white pencil highlights. Also, I drew lines in some of the spaces, then turned them into circles to make it more interesting. Sort of like star anise crossed with peas in a pod.

Posted by Samantha Corte at 6:08 PM No comments:

My daughter and I used to really enjoy playing Nancy Drew computer games together. We’d take turns at the mouse, clicking on objects and puzzles, moving around, and having conversations with the characters we met. An important part of playing these games is investigating anything that can be opened—doors, drawers, and boxes of all kinds.

Often these boxes require you to solve a puzzle in order to open them. In a computer game, the puzzle could be anything from sliding pieces to rotating colors in a specific order to… well, any kind of game you can play on a computer. In the real world, the puzzles are a bit more limited. Still, I love boxes that have a trick to them.

All boxes are a bit mysterious in that you can’t see what’s inside until you open them. (Okay, glass boxes are an exception.) Back when I was young, a neighbor who collected decorative boxes told me that a box should always have something in it, even if it is just a penny. I think she had it right. 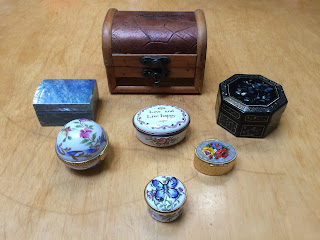 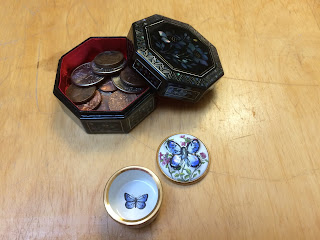 Puzzle boxes offer a third delight—that of solving the puzzle. Even if you already know how a particular box is opened, there is something pleasantly sneaky in the knowledge that other people will not be able to open it without some difficulty.

I have two puzzle boxes. One, which I received from a friend, is only mildly tricky. The pieces of the fish have to be removed in a specific order, and some slide up while others slide sideways. Still, I love the fact that it is not a straightforward box.

The other box is a Japanese puzzle box. Opening this box involves sliding whole surfaces forward or back or up or down, in the right sequence. I believe it is one of the easier ones, and that is difficult enough for me. 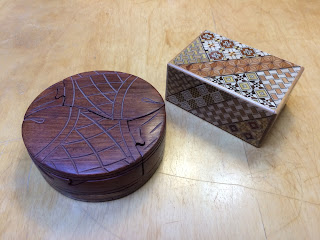 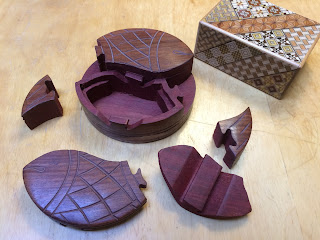 Finding a place to display decorative boxes is a problem, though, especially if you end up with lots of little ones. What to do? Well, when I went looking for my small decorative boxes so I could take photos of them, I looked in… yep, more boxes.  One of those was a decorative box of the sort found at Michael’s.

And speaking of mysteries and discoveries—in the same box I found the record of my smallpox vaccination, dated 1977. 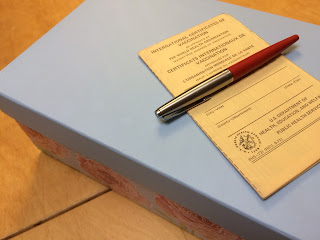 You never know what you’ll find.

Posted by Samantha Corte at 5:15 PM No comments: