Last week I watched the Great British Baking Show episode 7, "Festival Week" in which the contestants have to make a Sarawak style cake.  When the hosts announced that this was a cake in which the layers were grilled, my jaw dropped, wondering if they were going to have stove-top grills, or set up outdoors.

It turns out "grilled" is a Britishism for "broiled" (or else "broiled" is an Americanism for "grilled"--you know what I mean.) Even so, I'd never seen a cake broiled layer by layer, nor one that gets cut up and reassembled like a strip-pieced quilt to create colorful geometric patterns. It seemed such an odd way to create a thinly layered, colorful cake that of course I had to try the technique myself.

I had no ambitions to go the whole way and create a mosaic made of cake. I just wanted to make a colorful layered cake using this completely new (to me) method. So I looked up some recipes.

Quite a few of the recipes for sarawak kek lapis were not in English, which makes sense since it is apparently a Malaysian specialty. I did find one in English that didn't take a dozen eggs to make--only seven. (Kek Lapis--Indonesian Layer Cake.) The layers weren't colored and it seemed very mildly spiced, but I tried it, adding orange zest and cardamom and food coloring to make alternating layers.

Unfortunately, I was so nervous about overcooking the layers that I ended up undercooking them. When I tasted the edges, I realized that I hadn't flavored it enough either. It did have pretty layers, though, where they weren't gooey and underbaked. 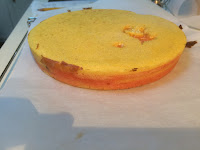 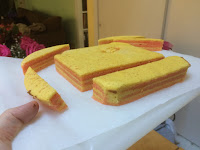 Something about the process of piling batter upon partially cooked batter made me think of pancakes. You know how the underside of a pancake shows where the first scoop of batter landed, and where subsequent additions of batter spread out from it? I decided to try making a version of kek lapis using pancake batter. I used an extra egg, thinking it would cook more quickly that way, and some extra sugar (pancakes aren't very sweet by themselves.) I divided the batter into four bowls and colored them brightly. 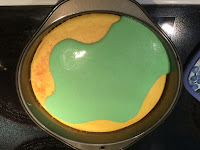 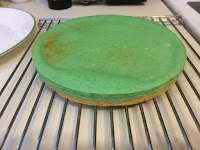 I did get layers, albeit very, very uneven ones, and I did cook it all the way through. However, the result was very eggy, like the inside of a popover, only heavier. While I like popovers, I don't like heavy, eggy cakes. The second try at a Sarawak style cake ended up in the compost like the first. 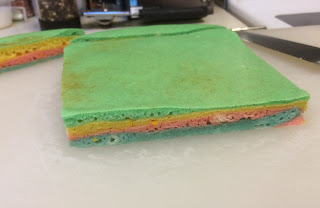 Finally I decided to use a familiar cake recipe, a hot-milk sponge cake from the Better Homes and Gardens (1996) cookbook. It's a very sweet cake, but reasonably airy and light on butter, so I thought it might do. Also, it requires only two eggs and doesn't require that the whites be separated out and whipped, which makes it a lot easier that the first kek lapis recipe. I added orange zest, then divided the batter into four bowls and added cocoa powder to two of them and food coloring to the other two.

Oops--stirring in the cocoa and food coloring definitely took away some of the carefully fluffed up volume. As the bowls of batter sat waiting their turn in the oven, I could see bubbles appearing on the surface. Not good. Perhaps I should have waited to stir in the color of each bowl until just before pouring it into the pan.

After baking--I mean broiling--the layers, I put the cake in the center of the oven at a more usual 350 to finish baking. I didn't want another underbaked cake.

The result? Very uneven layers, but layers nonetheless. And with the orange zest, cocoa powder, and huge amount of sugar--a moderately tasty cake. 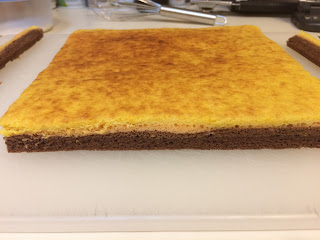 I'm not sure when I would actually need such a cake, but perhaps I might want squares of colorful cake for some festive occasion. 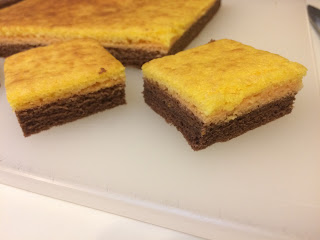 Now that I've finally created an edible cake in the style of sarawak kek lapis--or at least the first stage of a kek lapis--I think I can move on to other baked goods. Time to watch some more Great British Baking Show!

Till next post.
Posted by Samantha Corte at 6:29 PM No comments: